Gadgets for the Guru: Kids and their robots – CES

This week’s Gadgets for the Guru is dedicated to the kid in you. While these gadgets may be geared toward elementary-aged children, you’re never too old to feel young again! At CES 2015 in Las Vegas last week the AZTB team came across a variety of toys that combine entertainment and education for a maximum interactive experience. Check out the hottest tech toys for kids.

The Play n’ Trace is specifically designed for the toy market and is the first Boogie Board eWriter model to feature a translucent LCD writing surface. The toy’s hardware design is similar to an artist’s palette, which makes it comfortable and easy to hold for hands of all sizes, and the translucent LCD allows 2D and 3D objects to be traced for hours of creative fun. A free Play n’ Trace activity center mobile app includes structured learning exercises, games and drawing templates. The Play n’ Trace will be available holiday 2015 at an estimated MSRP of $29.99 USD.

The new Boogie Board Jot 8.5 Paperless Memo Pad features an ultra-bright reflective LCD that is 50% brighter than previous models, combined with a sleek, ultra-thin and ultra-light product design that makes it ideal for the home, office, school, or on-the-go. Both new models have the familiar superior writing experience that makes Boogie Board eWriters so popular. The Jot 8.5 will come in three colors – blue, pink, and gray – and will be available summer 2015 at an estimated MSRP of $24.99 USD.

For additional information about Boogie Board LCD eWriters click here

Build your own interactive robot that has voice recognition technology and can tell you a knock-knock joke. Meccanoid was unveiled at CES 2015 and it definitely was a scene-stealer. It’s an advanced, yet easy-to-use, open source robotic building platform and uses its onboard “Mecca Brain” to say thousands of phrases, offer fun facts, play games and even remember your birthday! It’s super easy to program and can be synced to a Bluetooth-enabled device with its accompanying mobile app, and because of its open source feature, you can program it however you like using any code programing that exists in the market today. With an abundance of cool and techy features, the Meccanoid is the ultimate toy. Watch our demo from CES 2015 below of what kids can make with the platform. Meccanoid has a projected MSRP of $399.00 and an estimated release date in Fall 2015.

WowWee, a leading designer and developer of innovative hi-tech consumer robotic and consumer entertainment products unveiled two new gadgets at CES 2015; the REV and the MiPosaur.

REVs are Robotic Enhanced Vehicles that are app-enabled and built to battle it out. REVs think and fight for themselves and are equipped with BeaconSense technology, a proprietary indoor GPS system that enables them to sense their surroundings and circumnavigate accordingly. REVs are hardwired to outwit, outplay and outlast YOU, their human opponents. Each REV Starter Kit comes with two specially-equipped vehicles; just download the free app onto an iOS or Android smart device and jump into the driver seat, while setting the second REV to autonomous mode. MSRP $99.99 includes 2 REV vehicles and launches in Q3 2015. Watch a demo from CES ShowStoppers below.

The MiPosaur is a robotic creature with an astonishing, evolving intelligence and personality. It can sense its own surroundings and environment, and interact with them in a unique and lifejlike way. In addition to featuring GestureSense technology that lets you control it with the swipe of your hand, the MiPosaur has sturdy MIP (Mobile Inverted Pendulum, created with the UCSD Coordinated Robotics Lab) balance and comes with an interactive TrackBall equipped with BeaconSense technology. With it, the MiPosaur can chase the trackball, play with it and guard it. The MiPosaur is fully interactive with the MiP robot and a BLE enabled app, compatible with both iOS and Android smart devices, and will feature exciting and engaging games. MSRP is $119.99 and has an expected release of mid Q3 2015. This was a popular toy at CES and loads of fun to demo at ShowStoppers.

Personal robots are more intelligent than ever and AI Brain’s Tyche is no exception. Dubbed “the most intelligent smartphone robot in the world,” Tyche is an autonomous robot and the ultimate family companion. Tyche recognizes the human voice and can help solve problems that it distinguishes with its knowledge and memory capabilities. Other features include an alarm clock, text notifications and the ability to be controlled from a remote control through your smartphone. AI Brain says the personal robot is for kids 8+, which means an adult can have some fun with Tyche too! Learn more here. http://aibrain.com/products/tyche/ 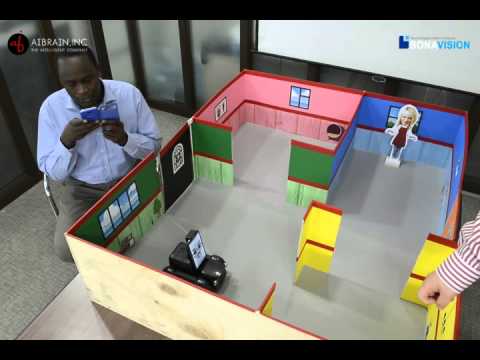 Flip through past Gadgets for the Guru articles for gift ideas and more!

Check out our full coverage of CES 2015 right here