Live-streaming, cloud storage and virtual reality don’t always make you think of the police, but when they do, they’re pretty awesome. Check out these ways the police are using cool new tech to make their jobs a little easier.

This might seem a little sci-fi, but virtual reality has found a home as a training tool for police officers. Tempe-based VirTra Systems is using round enclosures of screens with surround sound to help train them on when to use force. Check out the video to see it in action! 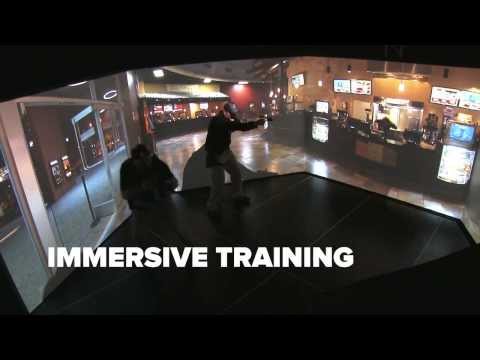 Wearable cameras are one of the biggest things in police tech right now. Studies have shown that the use of body cams reduces violence in police interactions across the board. Not only did officers use force less often, departments experienced a drastic reduction in complaints from residents.

Related: TASER stock spikes in the midst of Ferguson

Body cams are catching on in Arizona. Mesa, Gilbert and Peoria police departments have already jumped on board, with more to follow.

Live streaming goes along with body cams on the cutting edge of police  technology. Software  instantly streams video of  police encounters to a central  database for instant review. Other officers can respond  with advice or instructions and all the video is instantly organized.

If that doesn’t sound futuristic enough, local company Iveda Solutions’ goal is to add streaming to existing cameras to reduce costs and push the tech as far as possible.

Read: Smile for the camera! Police could live stream your next encounter

These scanners react to a special reflective material in license plates and then match them against a “hot list” of stolen vehicles or suspects. But what should make the bad guys shake in their boots is that police are scanning thousands of license plates. Officers can even piece together different scans of the same plate across the city to pinpoint the locations of criminals.

We’ve all heard of TASER, but other companies are making forays into the market. Take Scottsdale-based Durendal. They’ve created the DISTRACT-BALL, which uses high-powered LEDs and intense sound to distract and confuse enemies. The device can both illuminate and clear rooms. It’s like a mini sonic scream.

With 3D scanning, police can create a digital model of a scene as it appears in real life. Officers in Yuma have been using FARO scanners, which use a system of mirrors and lasers, to recreate traffic accidents. The scans can be walked through, Google Street-View style, and capture some pretty insane detail.

Evidence management is headed to the cloud as police find new ways to handle all of that data. Digital evidence systems, like TASER’s EVIDENCE.com, try to streamline that process and make video, photo and written evidence easier to sort and understand. There are even apps that police can use to manage evidence from their smartphones! Wild.

Related: Your next fender bender might get 3D scanned by the police

Today, everything is personalized. From your Netflix queue, to your Amazon shopping suggestions, to your . . . 911 calls? Tempe 911 centers are letting residents create a Safety Profile that stores phone numbers, addresses and photos of household members to help responders act quickly on emergency calls. Think of it like a social media page that you hopefully never need to use.

What do you think is the coolest new thing police are using to fight crime? Let us know in the comments or on social media.