Restaurants serve up spicy tech across the US

Would you like a side of tech with your meal? Across the country, restaurants are spicing up their offerings by quickly implementing new ordering systems, payment systems and entertainment via tablets, apps and interactive tables.

In an effort to make customers’ dining experience easier and more relaxed, as well as to cut service costs, chain restaurants like Chili’s Grill & Bar and Applebee’s are rolling out interactive tablets at their tables.

Designed to let guests dine at their own pace, tablets like Ziosk and E la Carte’s Presto enable customers to order and pay for their meals, contact their server and play games at the simple touch of a screen.

The most recent mass rollout of these tabletop solutions was Chili’s Grill & Bar’s installation of more than 45,000 Ziosk devices in 823 restaurants, including 18 Valley locations.

“This rollout marks the first time a restaurant company has installed communal tablets at this scale,” Ziosk CEO Austen Mulinder said in a statement.

The summer rollout propelled Ziosk to gain 95 percent of the installed tabletop menu, ordering and payment market, according to the statement by Chili’s.

But Ziosk’s large market share may not remain for much longer as chain restaurants Applebee’s and IHOP prepare to implement Presto tablets at their locations.

The Intel-backed tablet offers similar features as Ziosk and also provides restaurants with guest analytics such as email signups, menu trends and the ability for customers to share their experience via Facebook.

While most major restaurant chains are adopting tablets, Arizona Restaurant Association CEO and president Steve Chucri said these screens will soon become the norm and not the exception.

“Patrons and consumers aren’t going to restaurants just for a meal, they’re going to a restaurant for ambiance, aesthetics and enjoyment,” Chruci said. “They’re going for that little extra flare that they didn’t get in their work week.”

Although tablets are currently capturing the attention of major restaurants, one small-town Arizona restaurant has turned to a larger screen to promote interactivity.

Just Desserts & Coffee House, a Tucson, Ariz.-based café, has installed what it calls the technology of the future – interactive tables or “smart tables.”

With these in-house produced tables, guests can look at the restaurant’s menu and entertain themselves with licensed, interactive games.

Software engineer Dan Collins designed the tables for Just Desserts and each table is composed of a Windows-based computer with an HDMI digital output. The tables cost around $1,000 to $2,500 each to produce, co-owner Linda Collins said.

Just Desserts recently added its menu to the interactive tables’ display and will be looking into adding an interactive ordering and payment system in the future.

“We’re always looking for ways to innovate our interactive tables,” Collins said. “Right now, we haven’t been able to find compatible technology for what we are hoping to do.”

With the rise of the digital age, it should go without saying that the world is interconnected on a scale that has never been achieved before due to technology. As ideas spread across borders, international players bring their A-game to the table — the interactive table, that is. 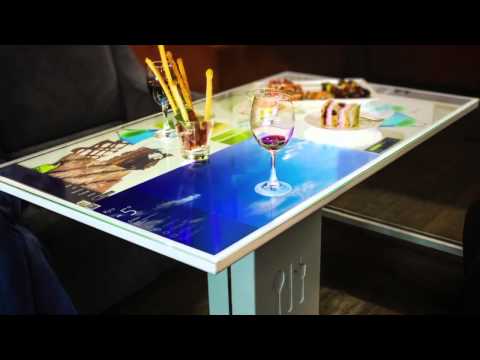 Having already established a presence in Dubai, the Ukrainian company is planning to build three “interactive venues” in San Antonio, Texas, and launch a manufacturing line in Nevada in 2015, according to a report by the Kyiv Post.

Besides interactivity, some tables and companies are also adopting augmented reality, which is a live view of a real-world environment generated by computers.

In essence, these interactive and augmented screens — tablet or otherwise — put the customer in charge of their dining experience and reduce the time spent processing food orders and waiting for the check.

With technology being used to take and process orders, some restaurant servers may be concerned about technology replacing their jobs, but Chucri said they shouldn’t worry.

“We’re a hospitality industry and computers can’t shake a hand, pat someone on the back or sing happy birthday, so I don’t see how technology can replace the human factor as it relates to being hospitable,” Chucri said.

However, technology will require servers to be better at being hospitable as technology takes on the labor of pushing orders, Chucri added.

“Technology and the human factor can coexist and will need to coexist going forward,” Chucri said. “I don’t see servers running out the door because they are going to be replaced by an iPad.”

Besides concerning wait staff, one issue that may occur with these tabletop tablets in the future is the security of their POS components.

After large-scale credit card hackings at major retailers and restaurants, such as Target and P.F. Chang’s, some companies have backtracked and adopted old-school credit card machines.

One reason hackers have been able to hit large companies on a major scale is because of the use of credit cards’ black strip to transfer information, Daniel Stone, the founder of mobile loyalty and rewards startup True Points, said.

To solve this, major credit card companies are beginning to roll out credit cards with smart chips paired with a PIN, Stone added.

One common form of smart chips is EMV (Europay, MasterCard and Visa) chips. Already popular in Europe and Asia, credit card holders’ information is embedded in the chips, making them more secure than the traditional black strip.

While EMV chips may be one of the most secure ways to pay today, companies and consumers are looking toward the future for a securer form of payment with Apple Pay.

Apple Pay is a new service on the iPhone 6, iPhone 6 Plus and Apply Watch that stores and encrypts credit and debit card numbers on a dedicated chip in the new phones. Through tokenization, the card numbers are assigned a Device Account Number that replaces the actual card numbers in a transaction, which reduces the risk of numbers being collected by hackers.

However, tokenization and Apply Pay are not a one-size-fits-all solution.

“The fact that not everyone has an iPhone or Apple Pay is a problem since only a subset of consumers will be able to take advantage of the technology,” Stone said. “The fragmentation amongst POS systems is a challenge to hitting critical mass with a new technology.”

Although tokenization reduces the exposure of credit card numbers, numbers can still be exposed on POS systems every time a user swipes or makes an online transaction.

Starting in October, Apple Pay will work with Visa, MasterCard and American Express and will be accepted at 220,000 locations including Panera Bread, Starbucks, Subway and McDonald’s.

Along with this, apps such as OpenTable are accepting the new form of payment.