Coming July 11, a new game from Interabang Entertainment will make you happy to pay your bills.

Co-founded by CEO and Creative Director Justin Woodward, an alumnus of Arizona’s University of Advancing Technology, Super Comboman is taking video games back to the times when Street Fighter combo attacks reigned supreme across arcades.

AZ Tech Beat first had the chance to play Super Comboman last month at Phoenix Comicon at the UAT station. We found the game to be a fast-paced, fighting adventure that takes place in a tropical, sticker world.

The story centers around the game’s hero, a socially awkward, kid-at-heart named “Struggles.” He shamelessly sports a mullet, wears a talking fanny pack and moves and attacks like his favorite comic book character, Super Comboman.

“The game is just utterly ridiculous,” laughed Woodward referring to its premise, but said it’s a reflection of the team’s personalities and humor.

And their silly appeal landed them a deal to publish them Cartoon Network’s Adult Swim Games which will launch on the STEAM gaming platform.

Struggles may live in a fantasy world, but has to transition into adulthood, while he looks after his little brother, Biscuit, and pays the mortgage through a string of odd jobs, the way his idol would: combo kicking and punching his way through it. 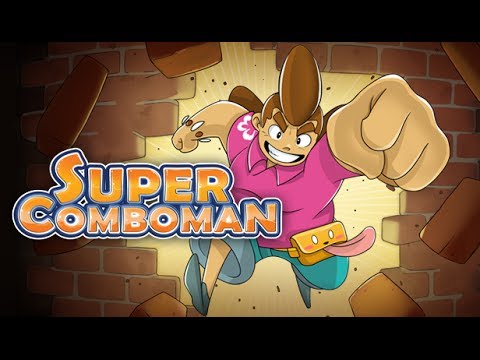 Players smash and pummel their enemies while developing their own combos in the process, advancing through levels only when defeating their boss.

But at the center of all this is a good message to its players: be happy to just be yourself.

“It’s kind of that mixture of that transition period in life, and also a character who just loves being himself, and even though he’s getting into these crazy situations, nothing phases him.”

Despite their upcoming debut, Interabang had to work through three year’s worth of obstacles to make it to where they are now.

The original team got together under a common frustration for their respective jobs in the gaming industry. “A lot of us were not satisfied with what we were doing, because we were just cogs in the machine,” said Woodward of the unchallenging jobs they had.

After successfully making one iOS game together, they started working on Super Comboman. IGN, one of the biggest media outlets for video games, then chose the team to be a part of its San Francisco-based incubator program for gaming developers.

Woodward said the team worked really hard to get the game done in the incubator’s 6-month time frame, but didn’t reach their personal goal.

Cash soon ran out, and team members headed back home, but Justin and a few others stayed behind to continue pitching the game to investors.

“After that I was a bit devastated,” he said of having to cycle through two sets of team members. “You know, it’s a really emotional process when everything basically falls apart, and you believe in it so much.”

However, now with their partnership with Adult Swim Games, Woodward said they hope to release Super Comboman on more platforms, and they will continue to support the game with new content after its release.
To get the game on STEAM click here.