Earlier today at SXSW in Austin, Edward Snowden took the stage from an undisclosed location in Russia where he is seeking asylum for his whistle blowing on the NSA. The discussion was moderated by Ben Wizner, Snowden’s lawyer, with guest Chris Soghoian, a privacy researcher and activist at the American Civil Liberties Union. 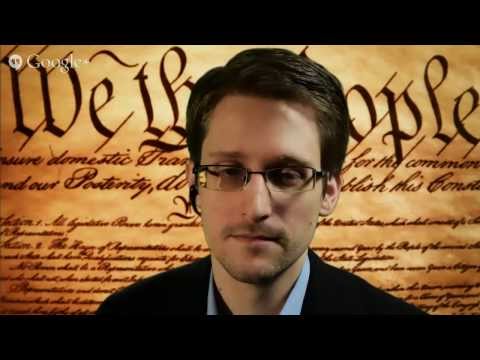 Throughout the interview, Snowden and Soghoian were quite blunt in their comments about government involvement and importance of protecting the public from cyber attacks and data collection.

“This government isn’t really doing anything to keep our country safe – they are more on offense than defense – as a country, we have been left to defend ourselves online,” Soghoian said.

Wizner asked Snowden if he could design a system with governmental oversight in mind what would it look like, Snowden mentioned two key points: accountability and consequences for leadership who lie to the American people, and trustworthy public advocates, “We need a watch dog that watches Congress,” Snowden said.

Wizner praised Snowden’s whistle blowing and attributed the increase in security measures by companies, such as Yahoo and Google, as a result of his information. “Without Ed’s acts the software companies would not have upped their security – the companies are taking security serious…rushing to encrypt their data centers and connections,” Wizner said.  “Without Ed’s disclosure there wouldn’t be that sense of urgency. We all have Ed to thank for this…without this act we would not have had Yahoo users with SSL…it took Ed to get us to a secure place.”

There still seems to be a distinct polarization of how people feel about Snowden’s disclosures. Watching the Twitter stream via #asksnowden, there was a fair amount of haters and fans. The Twitter audience also had the chance to pose a question to Snowden; with the most common question being “where are you?” – obviously that one wasn’t picked. The runner-up question was how the public can protect themselves online.

Snowden offered the following suggestions, and we threw in a few more that are less intense for the average user.

Full disc encryption – This feature, already built-in to many newer operating systems like Windows 8, or provided by 3rd-party software, encrypts your entire hard drive making the data unreadable to an unauthorized person.

Use SSL – When sending sensitive information (credit card, personal info) over the Internet, be sure the site is using SSL encryption. This is particularly important when using public WiFi.  As an added measure of security, ensure that the SSL certificate matches the domain of the site where you are sending the information.  At times a warning might pop up acknowledging that the certificate has expired or the domain name doesn’t match – make sure to double check the source before sending your info.

The most secure suggestion from Snowden was the use of TOR. According to the TOR website, it is “a network of virtual tunnels that allows people and groups to improve their privacy and security on the Internet. It also enables software developers to create new communication tools with built-in privacy features. TOR provides the foundation for a range of applications that allow organizations and individuals to share information over public networks without compromising their privacy.” This software was designed, implemented and used by the U.S. Navy for secure government community and now it’s used by anyone from journalists when communicating with whistle blowers to activist groups to maintain their privacy. Obviously this is an extreme measure for the average person, but if you are in need of total privacy, this type of “Onion Routing” software will make it so.

Clear your cache, cookies and browser history – All major browsers also support “private browsing” modes that allow all session data to be removed once that session ends and the browser is closed.

Use a Virtual Private Network (VPN) connection or service for protected web browsing, and increase security through their laptop or mobile devices, especially when using public WiFi or hotspot connections.